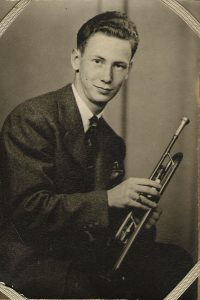 About Ed and Bashia Best, Parents of John Best

Walter Ed Best was born in Winchester, Randolph County, Indiana on May 29, 1881, the son of James M. and Lydia Thornhill Best.

Thomas Best, grandfather of Walter Ed Best, established the Thomas Best and Son Grocery in Winchester in 1867.  In 1897 when Thomas Best died, the name of the grocery changed to J.M. Best and Son. James (Jim) Best ran the store with help from his teenage son, Ed.  Ed joined him full time in 1906 when he was 25 years old. He learned the trade quickly and James took Ed into the business as a partner in 1913.  Ed bought 50 percent of the business for $700 in cash and a $1,500 note held by his father.  Due to remodeling, moving, and adding new products, it took Ed 20 years to pay off that note.

In 1920, Ed Best married Bashia E. Simmons of Winchester.  Bashia was born in 1884, the daughter of Winchester Friends Church members, Nathan and Ella Kem Simmons.  Ed was 39 years old and Bashia was 36 when they were married.  Five years after their marriage, John Alex Best, their only child was born when Ed was 44 years and Bashia was 41.  John grew up in Winchester, helping his parents in the Best Grocery store, occasionally attending meeting for worship at Winchester Friends Church, and playing the trumpet.  He eventually became noted as an outstanding trumpet player in Winchester High School.  Music was very important to both Ed and Bashia.  John graduated from Winchester High School in May of 1943.

In December of 1943, towards the end of World War II, John was drafted into the military.  About 40 other Winchester young men were drafted at the same time including another Winchester Friend Church member, Walter Mills.  Walter remembers the group went to Indianapolis by bus for physicals (Jon Fisher’s father ran the bus station at that time).  Only 14 of those Winchester young men passed their physicals.  Walter Mills and John Best were two who did and they were inducted into the army on the 21st of December 1943 in downtown Indianapolis.  On January 11th of 1944, John and Walter and the other Winchester men left Winchester on the train for Fort Benjamin Harris in Indianapolis.  Both Walter and John were together for 1 week until Walter was assigned to Water Transport and John was assigned as a Bugler for the Infantry (Company K 424th Infantry Regiment.)  John went on to basic training at Camp Croft in South Carolina, then to Camp Shelby in Mississippi and completed his training at Camp Atterbury, Indiana for overseas assignment.  The 424th Infantry was a part of the 106th Calvary and they left Camp Atterbury for Camp Myles Standish, Massachusetts for embarkation and shipment to the European Theater of Operations.  They sailed on November 10, 1944 aboard the U.S.S.Wakefield and landed at Liverpool, England.

Within a month, the 424th Infantry was in the middle of Europe preparing for what was to become the Battle of the Bulge, the bloodiest battle American forces experienced in WWII. The German Ardennes Offensive was thrown in force without warning at the 106th on December 16, 1944.  The first indication of the German attack at the beginning of the Battle of the Bulge was a report from John Best’s Company, Company K, informing headquarters heavy mortar fire was falling in its area. Company K saw the first enemy activity: German infantry moving toward the regiment under cover of artillery. An hour later the enemy penetrated the Company K and L area.  The division had been on the continent for only 15 days with many new soldiers and an average age of 22 years. There were almost 20,000 Americans killed in the Battle of the Bulge, almost 50,000 wounded, and John Best was one of the 23,000 captured or missing during the battle.  The battle lasted from December 16, 1944 until January 25, 1945.

Another Indiana son, author Kurt Vonnegut, was close to the same age as John Best.  His novel Slaughterhouse-Five is largely based on his experiences as a combat infantryman in the 106th Infantry Division. Vonnegut was also one of the soldiers captured during the 106th’s defeat at the Battle of the Bulge.  He was taken to an underground POW camp in Dresden where he experienced first-hand the Dresden fire-bombing. His experiences as a member of the 106th and a POW heavily influenced many of his early novels.

On January 16, 1945, a year after their son went to war, Ed and Bashia were notified their son was missing in action. After weeks of not knowing what happened to their son, on March 7th they received a letter from John, written from a prisoner of war camp in Germany.  On March 22, 1945, Winifred Blansett Thompson wrote a letter to John.  The letter did not reach John Best and was returned, postmarked on the back of the envelope June 19, 1945 from New York City.  From this letter I learned John E. Best was POW# 317 639 at Camp Lager Bezeichnung, M. Stammlager IV-B, Deutschland, Allemagne.

While John was a prisoner of war, the Yalta Conference took place.  Shortly afterwards the fire bombing of Germany began.  On March 31, 1945, thirty six British aircraft led by a Major Taylor bombed Halle, Germany from an altitude of 25,000 ft. RAF Major Taylor reported in his flight diary that “flak was meager and inaccurate and all the aircraft returned safely to base with no casualties”.

Except that there were casualties on the ground during this specific air bombing.  John Best was in a prisoner of war camp near Halle, Germany and unbeknownst to Ed and Bashia, John, and many other American soldiers died that day in the allied bombing.  They died one month before Hitler’s death and two months before the end of the war.  When John did not come home at the end of the war, Ed and Bashia went to post-war Germany and spent 2 months searching for him.  They were not able to find him or his body.  Ed and Bashia never really gave up hope that he might still be alive.  Five years after the end of the war, the remains of John Best were identified and brought back to Winchester.  Ed and Bashia buried their only son at Fountain Park Cemetery in September of 1950.  Ed and Bashia later learned that only five or six of the group of Americans with John that day in 1945 made it out of Halle alive.

Ed and Bashia Best continued to run their grocery in Winchester, still named J.M. Best and Son, until the store closed in 1963, when Ed was 82 years old.

In 2000 there was consensus among members of Winchester Friends to not use the interest income to accumulate more assets for the Church, but to be active stewards of the annual Best Trust interest income.   For the past 18 years, almost $250,000 of the surplus of the annual distribution has been given away outside of the walls of our building to make a difference in our world.

I believe Ed and Bashia would be at peace knowing their legacy and their love for their son is active and touching hundreds, and hundreds of people.  The death of this one young man, an only son, one day in 1945, is making our world a better place and making God visible in our world. I believe that is what our creator intended.